It’s one thing to market your product or service, but using your power and resources to drive action and awareness for a worthy cause is downright inspiring. In an incredibly creative cause marketing meets social media advocacy campaign, Honda is working to bring people together in support of saving drive-in theaters across the country.

If you didn’t know that drive-in theaters across the country were at risk of closing, you’re not alone. Despite people’s love for drive-ins, advances in technology are threatening to close down approximately half of the 368 drive-ins in America over the next three months. The root of the problem is that the movie industry is making the transition from film to digital, resulting in the need for drive-ins to upgrade to digital projectors. At roughly $80,000 to upgrade, it’s cost prohibitive for most small town theaters. 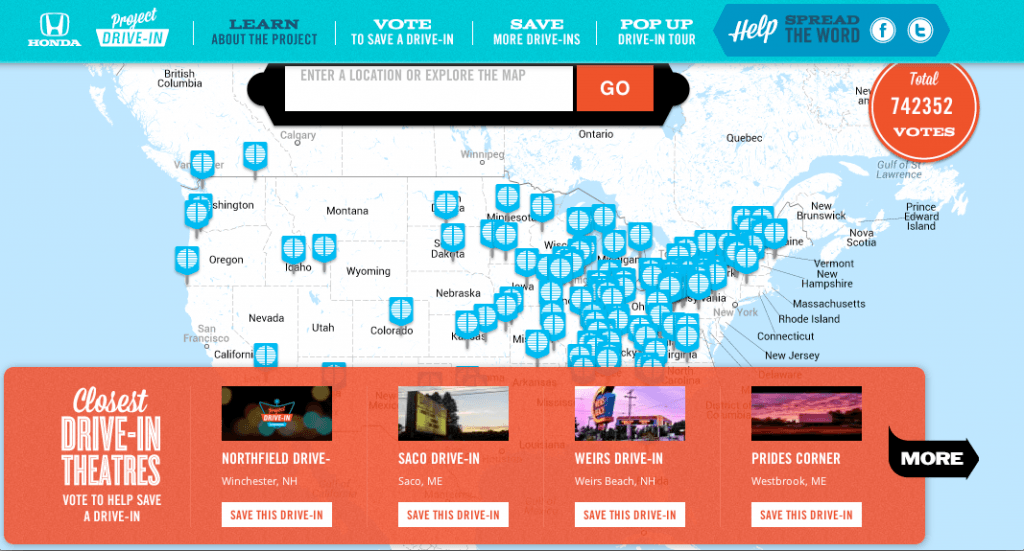 Inspired by this issue, Honda is championing an effort called Project Drive-In. Hosted on a dedicated website, Honda is looking to raise awareness and encourage people to help save their local drive-ins across the country. The Project Drive-In website showcases a powerful video explaining the situation, plus opportunities for people to get involved. People can vote for the five theaters Honda will donate digital projectors to in the United States. When voting, people can read information about the drive-in, from its history, to its role in the community. Participants can also pledge to donate money, express plans to visit a local drive-in this summer and spread the word via Facebook or Twitter. At present, the campaign has generated nearly 750,000 votes and has raised more than $18,000. The campaign video on YouTube has generated more than 300,000 views.

The success of this campaign is that it harnesses the nostalgia for drive-in movie theaters with a range of opportunities for people to get involved. It’s important to focus on raising awareness while offering multiple ways for people to join in and showcase their support. For some, it may be sharing via social media, while for others it may be voting or donating money. The key is to make the case to people and prove why the cause is worth their time, effort, and support. This is something Honda does a fantastic job with in the campaign video. The storyline, sound bites, people featured and music truly bring Project Drive-In to life.

It’s also important that the campaign spark a dialogue among interested participants. These types of campaigns can hit very close to home, inspiring people to share their stories and knowledge. They can also easily generate a range of feedback that extends beyond the initial scope of the campaign. With Project Drive-In, some comments on YouTube question whether the movie industry should step in, while others wonder if the issue may also extends to small town movie theaters. This type of feedback and conversation helps to extend the shelf life of the campaign, provided that a team is active and available to respond and keep the momentum going through community management.

As someone who frequently visited a local drive-in as a child and teenager, the campaign conjures up fond memories of why drive-ins are important and the role they play in American culture. It’s hard to imagine not being able to pass that experience down to further generations. Kudos to Honda for stepping up to the plate, sparking discussion and creating a platform for awareness.