Why Twitter Is the Anchor of the Social Media Team

Because of its simplicity and immediacy, Twitter enables brands to win the 1:1 battle with customers and potential customers in ways that even other social media constructs cannot. The density of Eureka! moments on Twitter is quite high, and if brands use it right, it’s the ultimate weapon for turning lemons into lemonade.

Recently, I was a speaker at the ExactTarget Connections conference in Indianapolis. Like all good digital marketing geeks, I was monitoring the Twitter conversation by setting up a search for “#ET08” (the official conference hashtag) and “Exacttarget” on my Twitellator Pro iphone app. (this can also be done using http://search.twitter.com).

I come across the tweet below from Andrew Eklund, CEO of Ciceron, a Web marketing firm in Minneapolis.

Note that this conference had sold out at 1,200 attendees. A possibly soon to be disappointed Mr. Eklund was headed to the hotel from the airport. However, Dawn DeVirgilio runs the @ExactTarget Twitter account and was also monitoring conference tweets.

She rushed to the registration desk, signed up Mr. Eklund for the conference, and had a name badge and complete registration package ready and waiting by the time he made it to the hotel 15 minutes after his initial tweet.

Social media is all about timeliness. I have an RSS feed of any tweets that mention my name or company name. Apparently, folks at the National Hockey League are doing the same thing.

My recent post about the NHL’s new ad campaign and its missing social media and digital marketing ingredients was answered almost immediately by Mike DiLorenzo, the Director of Corporate Communications for the league: 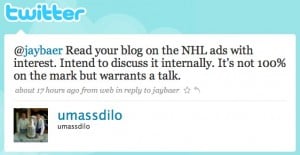 I then had a very interesting series of email exchanges with Mr. DiLorenzo about the NHL and its future social media plans. Fantastic! Talk about listening and responding with an authentic voice. To think that an NHL executive found my post through Twitter, acknowledged its merit, and then talked to me about it within 18 hours is simply extraordinary.

I’ve spoken at a ton of conferences lately, and while I’ve been absolutely blessed with on-time airline travel, I’ve been bedeviled by a series of crappy hotel rooms. The nadir may have been the Westin in Indianapolis, where I must have had the worst room on the property. I sent out this missive via Twitter: 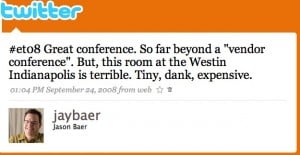 No response whatsoever from the hotel or Westin corporate. Given that nothing incites passion like travel, you’d think social media monitoring would be a MUST for a company like Westin. Evidently not.

I’m no Chris Brogan, Joseph Jaffe, or Jason Falls (yet), but I do have ~475 followers on Twitter (and a 92 on Twitter Grader). That’s 475 people (in theory) that saw me bitch about the Westin in Indianapolis (including at least 15 people who were staying at the same hotel). Can I determine the precise consequences for Westin as a result? No, but I don’t think it’ll help them. And I won’t be back.

You know what would be lovely? Getting my blog posts in your email>>